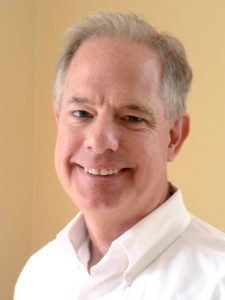 Matt had been working for just over a year as an independent IT project consultant when, in the fall of 2016, he developed symptoms of what his family would later find out was a very rare autoimmune disease.

On February 20, 2017, he passed away after a nearly five-month battle against that disease. He was surrounded by his wife and best friend Holly and daughters Colleen and Meredith.

Matt grew up in Baltimore and Pittsburgh, where he was an avid golfer. He received his bachelor’s degree from the University of Texas at Austin, where he met Holly, and his MBA from the Wharton School. Matt began his career as a legislative director in Washington, D.C. and later worked for General Foods. He spent 22 years with Dannon, working in Ohio, New York and France.

During his career, Matt Cook learned the ins and outs of supply chain software development and shared that experience not only with those he mentored, but with a larger community through his blog and in his book, Escaping the Software Money Pit.

Matt’s greatest joy in life was his family, and he loved his wife and daughters deeply. He was a soccer coach, cheerleader at countless sporting events, and mentor to many young adults. More than anything, he taught his daughters about generosity, kindness and compassion. As a member of Grace Community Church, he served as coordinator of Faith Furnishings and went on several mission trips to Appalachia, Mexico and Haiti.